Please Introduce Me To Awesome Plants!!

Last Saturday I went to the Los Angeles Fern and Exotic Plant Show with my friend Scadoxus.  Here are some of the plants that caught my attention... 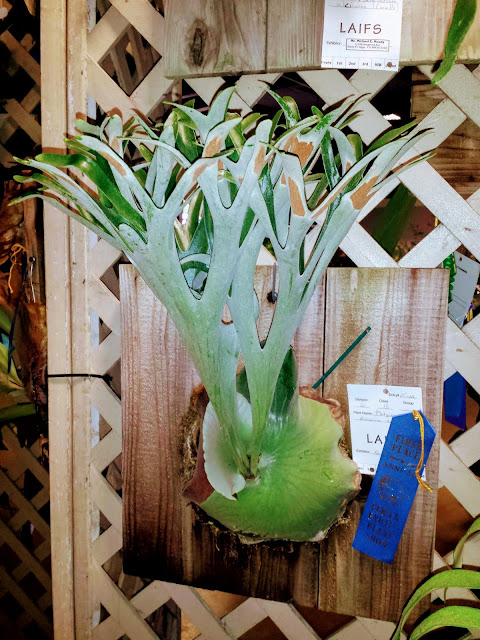 Personally I have a penchant for pendant plants so I tend to prefer Playceriums that match my pendulous preference... such as certain varieties of Platycerium willinckii.  The Staghorn in the above picture is the least pendant Platy that I've ever seen.  It definitely caught my attention and I have to admit that I kinda like it. 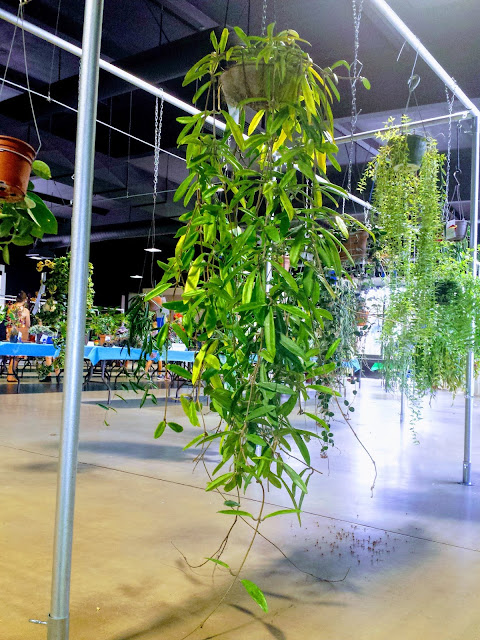 This is easily one of my top five favorite Hoyas.  The leaves are relatively succulent and it's a good epiphytic grower.  A while back I attached a piece of this and a piece of the somewhat similar, and far more common, Hoya shepherdii to a board covered in New Zealand Sphagnum moss.  Both Hoyas established fairly quickly but revolubilis won the competition by a mile.  The shepherdii was on its last leg when I took pity on it and moved the mount to the area that I water most frequently.

The revolubilis in the photo is a very impressive specimen.  We all like impressive specimens... but... the Epiphyte Society of Southern California (ESSC) has a rule about specimens.  Members of the ESSC are allowed to have specimens as long as they have already shared cuttings with all the other members.  Share, then specimen.  This rule is beneficial in several different ways.  First, it helps the plant.  No plant wants to have all its eggs in too few baskets.  Plants are all about colonization (location diversification).  Second, it helps the grower hedge their bets.  We have all lost plants for all sorts of reasons so it's really good to have many backups (plant insurance).  Third, it helps us learn about our plants faster.  The members of the ESSC all live in somewhat different climates, and have thumbs that are different shades of green, and employ different growing techniques.  It is very informative and useful to see how the same plant performs in a wide range of conditions.  Lastly, we should regularly introduce each other to awesome plants. 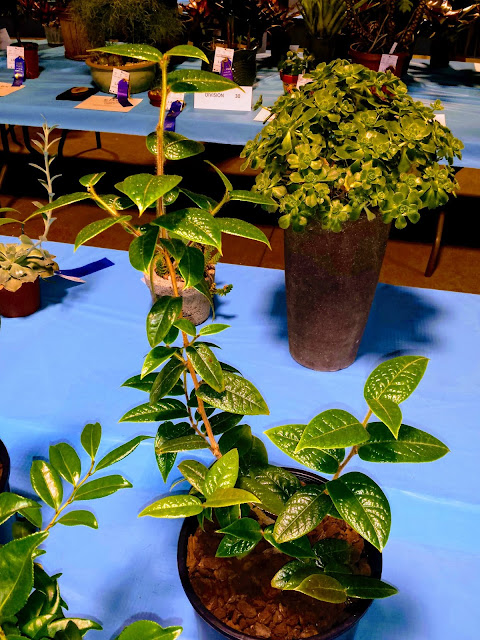 It's fuzzy!  At first glance I guessed that it was an epiphytic blueberry.  But I was wrong.  I'm generally not so interested in Camellias, although they might be a good host for some orchids.  In the case of this Camellia though I might be happy to have one. 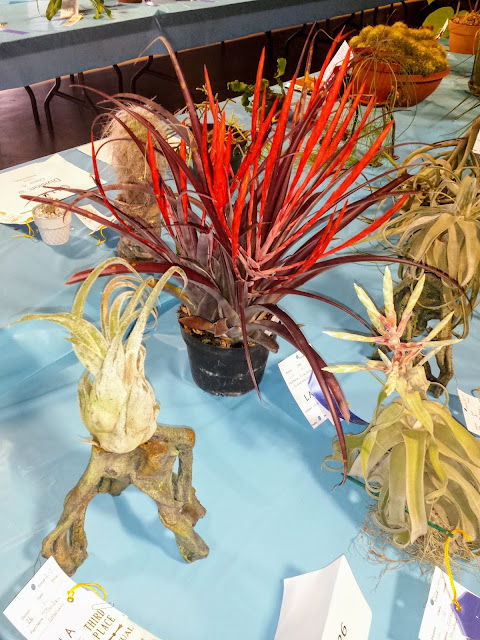 Hummingbirds love reddish Tillandsias and so do I! 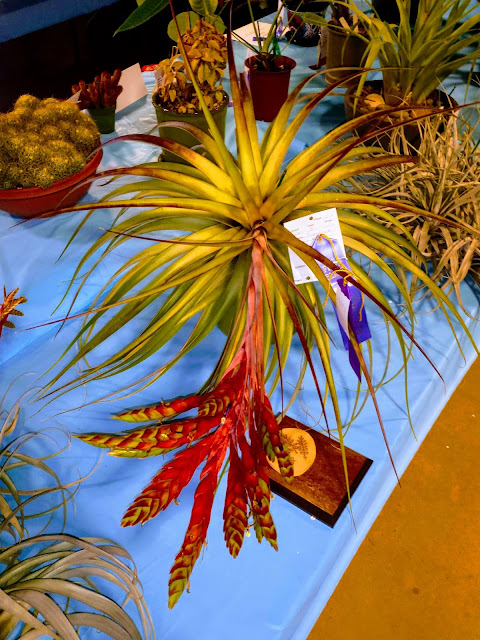 I want this!  Even if it's monocarpic?  Well... I hate monocarpic plants.  But there might be one or two exceptions to this rule.  Due to illegible writing I'm not exactly sure about the name of this Tillandsia.  It's a hybrid and its name starts with a B. 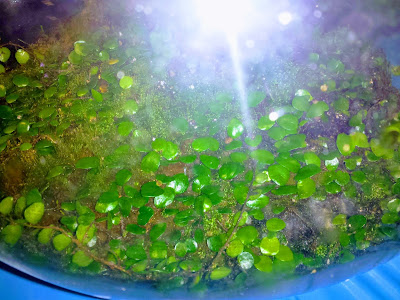 This isn't the best picture of this enchanting and endearing little epiphytic fern from Japan.  As you can see, it's very happily growing in a terrarium.  The fern was put in there by the terrarium genius Don DeLano.  He's very knowledgeable about plants and he gives great talks at society meetings.  At the show I asked him if he's ever tried growing this fern outside.  He said that he had but it got killed when the temps dropped below freezing.  Given that it's from Japan I was somewhat surprised.  Turns out that he was growing it in a pot.  My guess is that, here in Southern California where it rains during the winter, epiphytic plants handle the winter cold better when they are mounted, because of the excellent drainage.   In my Cedar Tree Epiphytes blog entry I shared this photo of L. microphyllum growing over two stories high on my tree... 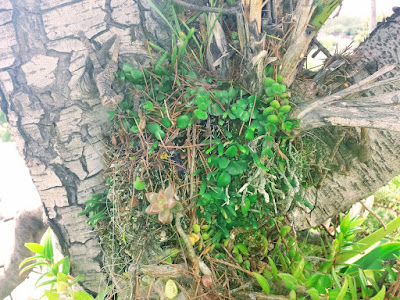 It's mounted on several very healthy handfuls of New Zealand Sphagnum moss.  When I mounted it I also included a few other plants such as a cutting of Columnea Elmer Lorenz.  The fern has done really well but, unlike Microgramma vacciniifolia, it doesn't seem to be able to "escape" its moss island/prison.  Even though L. microphyllum isn't an escape artist it is definitely one of my very favorite ferns.  Here's another favorite... 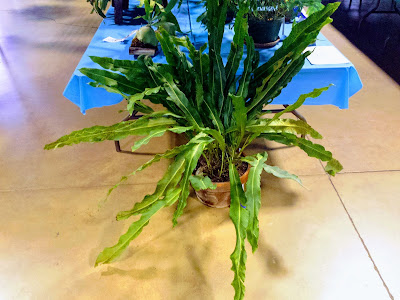 This epiphytic fern has very long fronds and does quite well outside here in SoCal.  Perhaps through no fault of its own I didn't manage to get it established on my Cedar tree, but I do have it growing on a tree fern and on a Pygmy Date Palm.  Microsorum punctatum is another strap-leaved epiphytic fern with somewhat shorter fronds which might be more drought tolerant.  I do have it growing on my Cedar tree.

At the show I met ESSC member Gumbii for the first time.  He has a Youtube channel about plants.  While we, along with Scadoxus, were looking at the entries I mentioned that we really should do a video of them.  From my perspective even a quick video would be better than nothing.  Perhaps we could just highlight our 10 favorite plants in the show.  Or, I joked, we could criticize the 10 worst plants in the show.  Scadoxus chimed in that at one bromeliad society meeting some guy very badly criticized a plant that a member had brought in for others to appreciate.  When the critic asked whose plant it was, the owner didn't even want to admit that it was their plant.  Yikes!

After the show Scadoxus and I drove to Fernando's garden in West Covina.  While on the way there I was telling her about how I had learned of some new terms for an idea that I've discussed with her many times before.  The idea, and one of its terms, is voting with donations.  I explained that this is most commonly associated with using donations to decide who will have to kiss a pig, or get pied in the face, or get dunked into a tank of water.  Sometimes zoos use this method to name an animal.  That's when Scadoxus said something like, "Oh yeah, San Diego Zoo does that.  Around 15 years ago I was there with my niece and we made a donation to help name a panda."  I responded, "What in the world?  Seriously?  We've been talking about this idea for so many years (maybe like two) and you're only now just sharing this information with me?!"  "You didn't ask me about it," she replied, "...better late than never."  Ugh.

When we got to Fernando's place I started to carefully inspect his very impressive collection.  From the corner of my eye I spotted a small flash of color.  I looked more closely and saw what appeared to be a Pelargonium flower just randomly floating in mid-air... 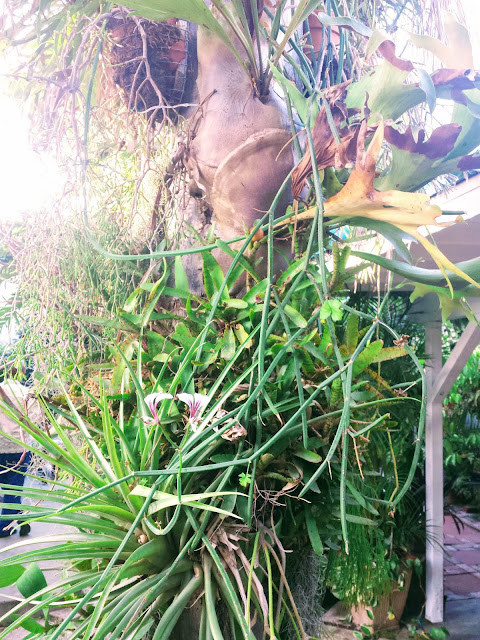 It was a nearly leafless pendulous Pelargonium that was growing epiphytically!  What?!  Have you heard of such a plant?  I sure hadn't.  So I asked Fernando about it and he said that he's had it for around a decade.  What?!  How come he hadn't introduced me to this plant?  Ugh.

We've all failed, albeit unequally so, to introduce each other to awesome plants.  I personally feel like I've failed to introduce enough people to the epiphytic fern Aglamorpha coronans.  Here's my attempt to try and solve this problem...


It's so very neat that Aglamorpha coronans has wrapped itself nearly all the way around Fernando's palm tree!  The video really doesn't do this fern justice, but I hope that it's better than nothing.

There's actually another Aglamorpha species that's even more impressive than coronans... Aglaomorpha heraclea.  It has really huge fronds.  I tried to grow it once but it wasn't a fan of our winter.  While talking to Darla Harris, the president of the Texas Gulf Coast Fern Society, I mentioned that it would be really awesome if heraclea was crossed with coronans.  When the president of the Tree Fern Society, Dan Yansura, joined the conversation, I brought up a few other crosses that should be attempted...

Not sure how compatible these species are, but ferns are relatively easy to grow from spore.  I've personally had good success simply sowing the spore directly on wet floral foam that's in a pot in a zip lock bag.  Darla hadn't heard of this method before.  Hopefully she'll give it a try.

Fernando had the largest Sinningia that I had ever personally seen... 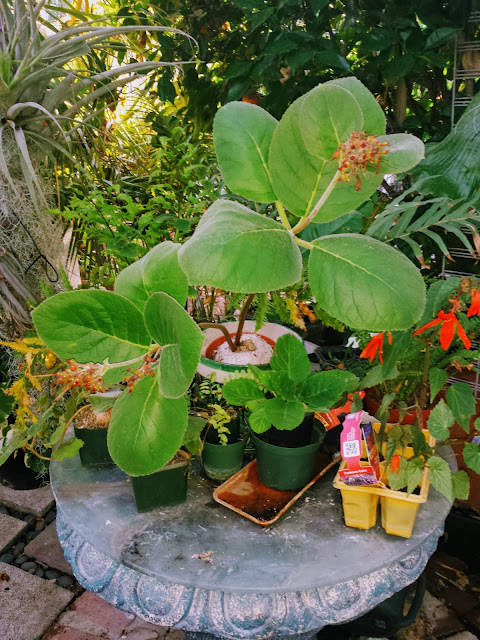 Please remind me to remind Scadoxus to remind Fernando to harvest the seeds.  The same goes for his Begonia thiemei.

Hopefully we should all agree that we need to do the best possible job of introducing each other to awesome plants.  Right now I'm thinking that this vital task can be most efficiently and effectively accomplished by using donation voting (DV).  Fortunately for us, there are already websites that can facilitate this.  For example...

Organizations, like a local humane society, can create a contest for participants to submit and sort photos...

Those photos are sorted by DV ($1 donation = 1 vote).  Here are a couple other similar websites...

Members of various plant societies and forums could submit photos of their favorite plants and we could use DV to rank/sort/order/prioritize them.  Naturally in this case it wouldn't be possible to use our donations to criticize the worst plants.  Instead, we'd use our donations to help highlight the very best plants.  All the money raised would be spent to help promote the results.  We would essentially be pooling our money to introduce the most people to the most awesome plants in the least amount of time.
Posted by Xerographica at 5:23 PM