A few years ago I sowed various orchid seeds on my tree.  Much to my pleasant surprise some of them actually germinated.  Right now there are around half a dozen seedlings left...down from around two dozen.   The largest seedling looks a lot like Laelia anceps...and I'm guessing that's what the rest are as well.

Seeing the tiny green blobs on my tree motivated me to try and pollinate more orchids.  Unfortunately I haven't noticed any new protocorms on the tree.  Not sure why that is.  It might be because the year the seeds germinated we received more than twice the usual amount of rain.  Perhaps the extra rain created a fungus feeding frenzy.  Or maybe it's because I haven't sown any L. anceps seeds since then.  Last year I failed to adequately hedge my bets so none of the L. anceps flowers that I pollinated developed pods.  But I've also sown a few other orchid seeds in baskets/mounts and some have germinated.

This year I've been especially consistent with pollination and as a result there are quite a few pods in various stages of development.  But because symbiotic germination hasn't been consistent...I'd like to hedge my bets by sharing orchid seeds with anybody interested in flasking them.  Bet hedging, from my perspective, is by far the most important plant lesson.

My primary breeding goal is to make progress in terms of drought tolerance.  It would be wonderful if there were more and more orchids that could thrive with less and less water.  This is especially relevant here in parched Southern California.  So over the past several years my primary purchasing criteria has been drought tolerance.

How much progress can be made in terms of drought tolerance?  Not exactly sure...but I do know that there's always room for improvement.   The orchid family's success is the direct result of each seed pod containing a multitude of chances to discover where there's room for improvement.  In other words...orchids are really good at hedging their bets.

Basically, my overall goal is to select for orchids that are better suited to Southern California.  This means selecting for individuals that are more Mediterranean.  I'm pretty sure that the orchid family's gene pool is large enough to develop an epiphytic orchid that can thrive here without any supplemental water.  When will this orchid be developed?  That depends on the quantity of different trait combinations that are thrown at Southern California.  More combinations mean less time.

Here are some pods that are available or will be available...starting with those that have been pollinated with pollen from Psychilis krugii...which is many of them.

Besides being drought tolerant (growing on a cactus)...P. krugii blooms all summer long.  It successively/sequentially blooms on the same spike.  As soon as one flower starts to fade...another starts to open.  Having an extended blooming period is another example of bet hedging.  It increases the chances that some seeds will be dispersed when conditions are sufficiently suitable.  Personally, I really enjoy having an orchid that stays in bloom for so long.  The flowers aren't very showy though...so it would be nice if some of the crosses were also successive bloomers but had larger and/or more colorful flowers.

I'm guessing though that the sequential blooming trait will not be dominant...especially since P. krugii isn't the pod parent.  So the first generation will probably have to be crossed back onto P. krugii in order for the successive blooming trait to express itself in some of the second generation crosses.

Here are some of the orchids that I've pollinated with P. krugii pollen... 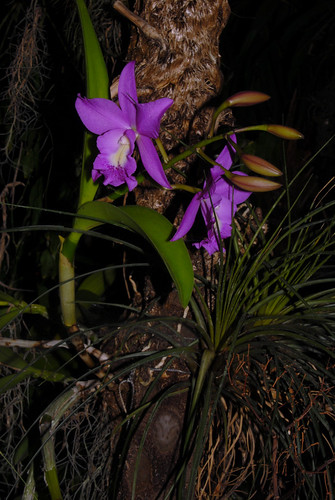 Anybody recognize this NOID Cattleya?  I bought it out-of-bloom for cheap.  When I saw the flowers for the first time I was a bit disappointed.  They are kinda homely.  But then it dawned on me that this Cattleya is one of my very first orchids to complete its growth cycle.  This earned it more than a few points and TLC.  I divided it this past spring which is why it bloomed later than it usually does.  What happens when this C-I-W grower is crossed with a successively blooming warm grower?   Perhaps future generations will have a longer blooming period than P. krugii does?  Can we eventually select for an orchid that's always in bloom?

The three orchids that make up Lc Clayton Waglay...the one Mexican Laelia and two Brazilian Bifoliate Cattleyas...are some of the very best orchids for Southern California.  It shouldn't be a surprise that Clayton Waglay is a really strong grower here.  Hopefully adding P. krugii to the mix will result in an even stronger grower.

Anybody recognize this Encyclia?  Context... 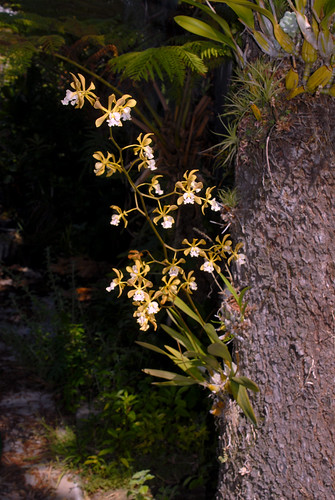 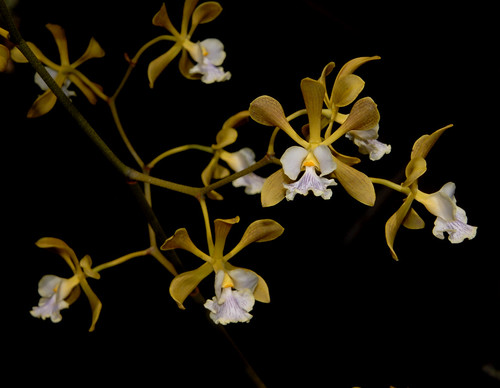 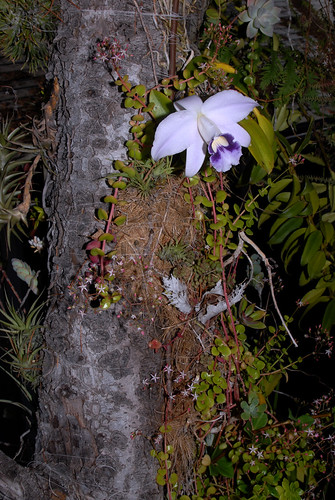 Why the really long pod?  It must have lengthened after I pollinated it...right?  But why?  And when exactly did it start lengthening?  It doesn't make much sense for the Rhyncholaelia to waste energy increasing the distance of the race course after somebody has already reached the finish line.  It makes more sense to increase the course distance before anybody has reached the finish line.  Making the selection process even more difficult would help ensure that the winner was fit enough...at least in terms of endurance.  Given that this pod didn't have any seeds...perhaps none of the P. krugii pollen managed to reach the finish line.

Pretty sure that the Hummingbird pollinated it.  No other monopodials were blooming at the same time...so definitely a self.

The first two flowers didn't develop pods...but the third has.  Another example of hedging.

There were two pseudobulbs that had around a dozen flowers each.  I pollinated around half the flowers on each spike and half of those have developed.

A friend of mine has quite a few different colored Reed Stem Epidendrums.  Last week, with his permission, I harvested a dozen ripe seed pods.

My P. krugii isn't very large...so I prefer it to channel its energy into producing pollen rather than seeds.  But I guess it was the hummingbird that thought differently.  I could have removed the pod before it developed...but I decided not to step on the hummingbird's tiny toes.  The pod might not be a self because around a foot away an Encyclia spontaneously developed a pod at around the same time.

On Aug 27 I pollinated nearly every flower with a mix of pollen from Mexican Laelias and Cattleyas.  Given that only three pods took...I'm guessing that the Mexican Laelias pollen was too old.  And given that the Cattleya pollen largely consisted of relatively fresh Penny Kuroda pollen...I wouldn't be surprised if that is who is responsible for these three pods.  Unfortunately all three pods recently aborted.

For some reason it seems like I haven't had very much success with Encyclia intergeneric pollination.  Earlier in the year I had two very nice Encyclia cordigera var roseas bloom.  If I remember correctly I tried crossing them with Mexican Laelia pollen but pods didn't even form.  Same thing with Encyclia Orchid Jungle, Encyclia fowliei and a few others.  It's pretty good incentive to keep better track of pollination efforts.  That way I can avoid wasting good pollen on the wrong orchids.

There are also quite a few spiking orchids that I plan to pollinate...


Hopefully my consistent pollination streak will continue and I'll have pods for days.

Anybody interested in some seeds?  If so, just private message me your e-mail and I'll add it to a notification list.  Whenever I harvest a pod I'll send an e-mail to the list.  If you'd like to flask the seeds then you'd simply reply to the e-mail.  Should demand exceed supply...priority will be based on the following criteria...

Any questions?  Let me try and guess a couple...

Can you buy seeds?  Sure, everything has a price.

Can you have the seeds professionally flasked?  Yup.