Bundles aren't inherently bad.  This entry, like most of mine, will bundle a few different ideas and topics together... but they will all be more, or less, relevant to the topic of plant societies.

My friend Monica is a member of the Epiphyte Society of Southern California (ESSC).  A few weeks ago she invited Dave and I over to see her place.   Dave is another ESSC member.  Last year she saw his collection but he still hasn't seen hers.  Unfortunately, he couldn't make it this time... so I asked another ESSC member, Scadoxus, to join me instead.  We'd both already seen Monica's nice collection but it's been at least a year so Scadoxus and I figured that it would be worth it to see it again.

The day before we visited Monica, Scadoxus and I had driven down to Cerritos to attend our very first meeting of the LA/OC plant trading group on Facebook.  In my previous entry I listed a few different seeds and cuttings that I was offering to anybody in that group who was interested in them.  The meeting started at 10 am and it was held in a public park.  It seemed like over 50 people showed up with a wide variety of plants to share and trade.  Some people also brought food and drinks.  Plus there was a plant raffle.

After the meeting ended at 11 am, Scadoxus and I drove a few miles away to attend a begonia sale that was being held at a private residence in Lakewood.  Scadoxus wasn't sure if it would be worth it to attend because it had started at 9 am and she figured that all the nice plants would be gone.  She was wrong though, we found a really nice thick-stemmed begonia (Begonia dichotoma?) for only $5 dollars.  Plus, she ended up getting a good deal on a burgundy plumeria.

The owner of the residence was a really nice lady by the name of Chris.  She gave Scadoxus and I a tour of her collection.  I'm grateful that she did!  Her collection was nicely balanced.  In her shade house she had a specimen Nepenthes that she generously shared cuttings of.  Plus I saw some especially nice Begonias... 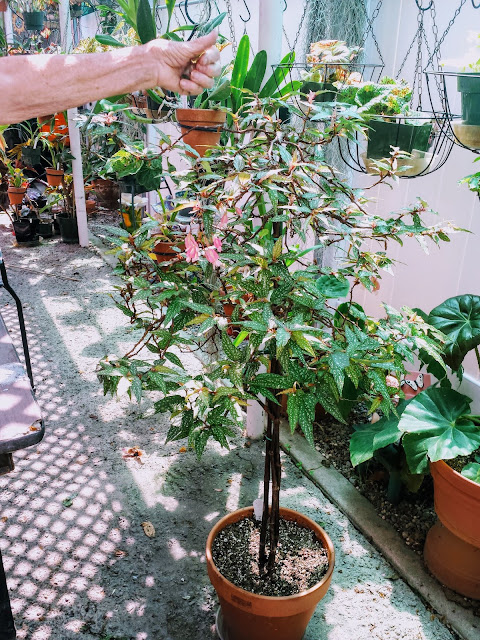 I really liked the form of this Begonia.  It was wonderfully shaped like a little tree, so of course I'd want to attach a few miniature epiphytes to it (ie Tillandsia tricholepsis).  I learned that this form is referred to as "standard". 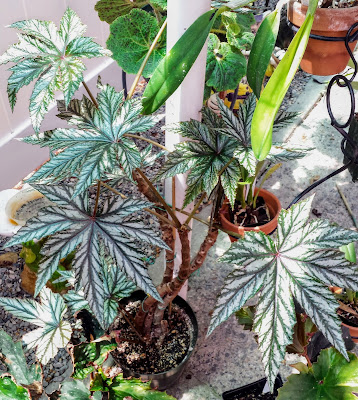 I really liked this thick-stem begonia, it reminds me of Begonia 'Kudos' (not its real name). 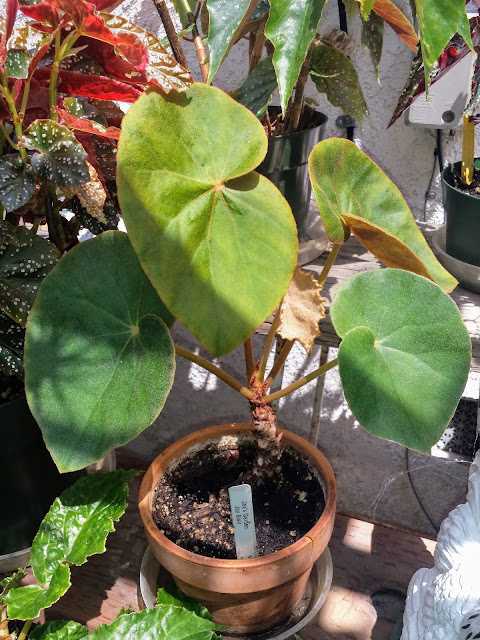 So nice!  It looks like a relatively drought tolerant Begonia.  The label says "Joy's Garden, Joy Blair" but a Google search didn't reveal any relevant results.  I'd really love some seeds of this when it blooms.  Chris did let me collect some seeds from her nice cane Begonias.

After Scadoxus and I finished at the sale, we drove a few blocks away to visit ESSC member Steve.  I'd been to his place a few times before but Scadoxus had never been.  One of Steve's very favorite things is variegated plants... he has many many many different ones. 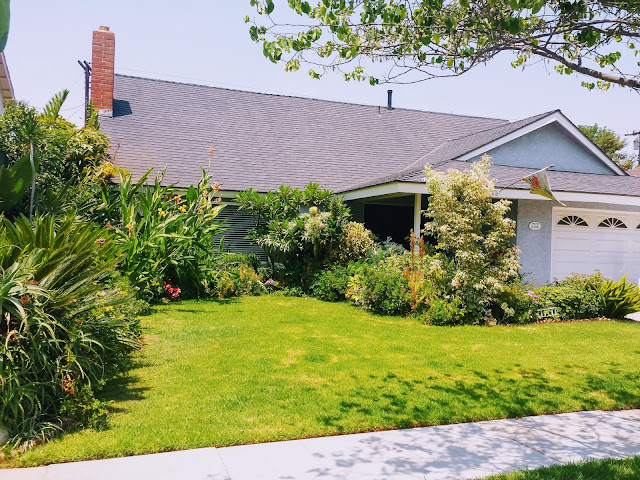 Lawn!?  He says that each year the border moves a foot.  From my perspective the rate is too slow.  There should already be a variegated Aloe Hercules right in the center. 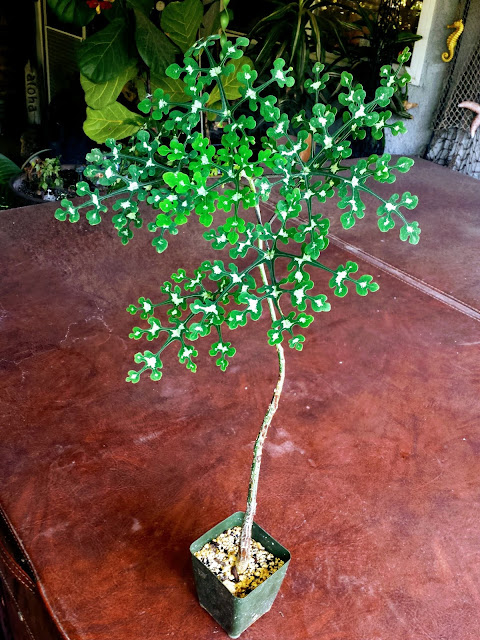 Even though Steve and Chris both love plants and live only a few blocks away from each other for many years... they didn't even know of each other's existence.  Let's say that they had become friends as soon as the second one had moved into the neighborhood.  How different would their collections now be?  I think it's a given that their collections would be better... otherwise there'd be no point in making plant friends!

My first job was working in a privately owned orchid greenhouse.  It was the summer after my freshman year in high school and my task was to divide and repot Cattleyas.  The owner of the greenhouse didn't have any mounted orchids, neither did he have any orchids outside the greenhouse.  I asked him if any of the orchids in the greenhouse could grow outside but he didn't know.  He did however very generously give me a couple big garbage bags full of backbulbs.  I remember excitedly attaching them to the trees in my backyard.  Alas, they all died... except for one Oncidium which managed to put some roots on the tree... which were promptly eaten by slugs.  Still, the fact that I had managed to achieve even a little success fueled my interest in growing orchids on trees.

It was several years later, probably when I was in my senior year of high school that, after lots of trial and error, and after many orchid causalities, I learned the reason why the all the other orchids in my first batch had died.  It had nothing to do with them being unsuitable for growing on trees... it was simply because I didn't attach them tight enough.  And in the case of the Oncidium, I had attached it too low on the tree.

Some time after college I joined the Orchid Society of Southern California (OSSC) and I took the opportunity to look through their collection of old AOS magazines.  I found a really excellent article by Susan M. Stephenson... Orchids Outdoors in Southern California.  It turned out that, at the same exact time that I was an ignorant but enthusiastic kid struggling to grow orchids on my trees... just on the other side of town there was a fellow by the name of Bill Paylen who had lots of orchids happily growing on his trees.  We didn't even know of each other's existence.  If we had, I'm sure that my collection would be a lot better than it currently is.

After finding Stephenson's article I digitized it and sent it to the AOS so that they could put it on their website.  It's been a decade since they did so... how much difference has the article made?  How much difference will this blog entry make in a decade?

The day after attending the Cerritos plant trade, the begonia sale, and visiting Steve's garden, Scadoxus and I visited Monica on the westside.  She has several trees covered in bromeliads, orchids, ferns and all sorts of other plants.  Somehow I didn't take any pictures.  I should have taken pictures.

When Monica visited my place a couple weeks earlier she told me that on her way to work she passed a house with a tree that had big bromeliads in it.  I asked her if she had ever talked with the owners but she said that she was always running late.  When Scadoxus and I were about to leave Monica's place, I asked her how far away the house with the bromeliad tree was.  She said that it wasn't far and told us the street that it was on, but she couldn't remember the closest cross street.

Scadoxus and I decided that it wouldn't hurt to check it out.  We found the right street and and shortly afterwards we spotted the right tree...