Ok, maybe there shouldn't be an Encyclia cordigera on EVERY tree in SoCal... but it should certainly be on MOST trees! It does like heat though so the closer to the coast you live the more full sun you'd have to give it.

I'm uploading this video for my friend Carlos in Brazil...

He doesn't have any videos yet! But I can't complain too much because he does share quite a few photos...

Here are some other links that should hopefully be of some interest...

Posted by Xerographica at 1:22 AM No comments:

On 29 June I received a box from a really nice friend.  Thanks friend!  The box contained some super neat mini Tillandsias and a couple tubes of orchid seeds...

The Epi is a species of reed-stem so I was very curious whether its seeds are as exceptional as the other reed seeds that I've sown.  My friend had informed me that the wrightii seeds contain lots of "cotton".  This was interesting to hear because I typically associate cotton with monopodial orchid seeds.  When I saw the wrightii seeds they did indeed look like they had lots of cotton.  Upon closer inspection I realized that, unlike with monopodial orchid seeds, the wrightii cotton was actually part of the seed! 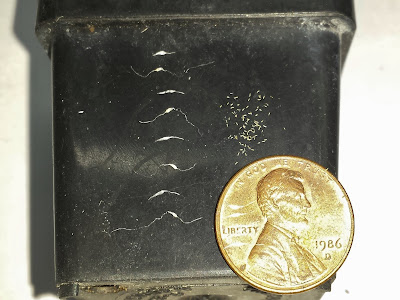 Here's what the wrightii seeds looked like after I soaked them for one night... 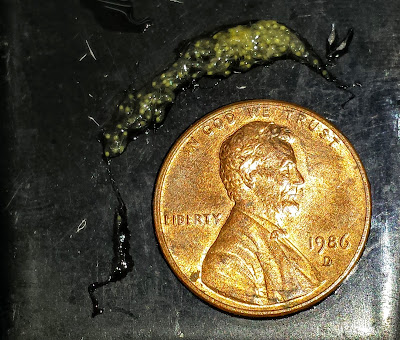 They clumped together just like Tillandsia seeds do when you put them in water.  Perhaps soaking before sowing isn't the best approach for wrightii seeds!

The orchid seed has no endosperm.  The seed consists of a simple, dry outer coat with a small mass of undifferentiated cells which form a pro-embryo.  This unit can be easily carried in air currents and may travel long distances before coming to rest.  - Calaway Dodson, Robert Gillespie, The Biology of the Orchids

Numerous mechanisms and devices promote appropriate carriage and secure anchorage.  The buoyancy of orchidaceous "dust" seeds is due not only to small size but also to a large airspace between embryo and testa; wall sculpturing and overall shape (usually fusiform) also help to keep them aloft and may encourage attachment to rough bark.  Tillandsioid bromeliad seeds feature hooked coma hairs for better attachment; similar devices on a much smaller scale adorn microsperms of shootless Chiloschista. - David Benzing, Vascular Epiphytes

Experiments indicate that buoyancy and mobility correlate with the apportionment of mass between the coma and the seed proper.   - David Benzing, Bromeliaceae: Profile of an Adaptive Radiation

More broadly, the epiphytes achieved relatively low terminal velocities at least in part because they allocate proportionally more biomass to the coma vs the seed proper.  Percentages (60.0-61.7%) of the aggregate seed mass represented by the flight apparatus grouped the obligate (T. utriculata and T. fasciculata) and faculative (T. ionochroma) epiphytes together, with saxicolous T. sphaerocephala (41%) as the outlier.  In short, the more consistently bark-dependent the taxon, the greater the relative cost of the coma, the more buoyant its seeds, and the greater the dispersal range.  - David Benzing, Bromeliaceae: Profile of an Adaptive Radiation


Does Epidendrum wrightii have a coma?  Kinda?  We can guess that the point of these appendages is to increase buoyancy and to help the seeds attach to bark.  But why don't other orchid seeds have these appendages?  Maybe they don't need them because they aren't as heavy as the seeds of Epi wrightii?  This would imply that, unlike orchid seeds, the seeds of Epi wrightii do have at least some endosperm.  And if most reed-stem Epis do have some endosperm... then we can guess that Epi wrightii is more epiphytic than most reed-stems.

According to Wikipedia (and Arditti and Ghani)... Epidendrum secundum has the distinction of having the longest seeds in the orchid family... 6.0 mm long.  Let's take another look at the comparison photo I took...

Are there any reeds with seeds that are longer than wrightii?  If so, then this would imply that they were more epiphytic than wrightii.

There are numerous species of reeds and I've only see a very small fraction of their seeds.  Hopefully this post will encourage people to share photos of their reed seeds.

It's really exciting to discover that wrightii seeds are somewhat similar to Tillandsia seeds.  This gives us some material that's potentially very useful in terms of breeding for orchids that are more epiphytic but have seeds that are easier to germinate (don't require flasking).
Posted by Xerographica at 5:43 PM No comments: