The Inefficient Allocation of Epiphytic Orchids

For those of you who don't know, during winter I tend to allocate more of my spare time to a much more important cause... pragmatarianism.  Yes, people having the freedom to directly allocate their taxes is far more important than having epiphytes growing everywhere on everything.  Which says a lot because I'm really sure that the world would be an infinitely better place with more epiphytes.  And if we could choose where our taxes go then I'd spend quite a bit of time trying to make the best case possible for epiphytes being somehow designated a public good that people would have the option to spend their taxes on.  Like, shouldn't there be a Dept of Epiphytes (DoEpi)?  You'd allocate as much of your taxes as you wanted to the DoEpi and they'd facilitate the flourishing of epiphytes everywhere.

Even though pragmatarianism is a much more important cause... by the time the weather starts to warm up I'm either burnt out trying to sell the creation of a market in the public sector... or the lure of spending my spare time hugging trees with my epiphytes becomes too hard to resist.

Well... even though it's pretty warm... I still haven't hit the wall with pragmatarianism yet.  But here I am though!  I blame... Catherine Kirby.  And Pierrot M.

The reason that I blame Kirby is because of her recent blog entry... Epiphytes in the garden.  It's a very exciting entry... she featured Mr. Epiphyte Tree and his most excellent epiphyte extravaganza.  She also described a study in Ethiopia where they documented a great variety of epiphytes growing on urban coffee trees.  Then Kirby wrote this...


I don't think that the Ethiopian situation is mirrored in New Zealand because we can't achieve forest-like humidity in urban centres but I would be interested to hear from anyone who has a good epiphyte load in their home garden, either planted or naturally occurring?


I am really amazed, what you have done is really wonderfull, i have a very big garden ( parc ) in France and i 'd love to do the same, but the climate doesn't allow it. I love orchids, i have seen a lot in the whole world, but the vertical garden you done is unique. A question : is the climate in california soft enough in winter to allow the plants to survive? do you water them? what is the care you do?﻿

If Pierrot wants to attach orchids to trees then he'd have to move somewhere else!  That's a terrible predicament that nobody should have to be in.  Wherever trees can grow there should be dozens or hundreds or thousands of different epiphytic orchids that can grow on them.  This is orchids' goal and mine as well.

All plants, but especially epiphytes, and especially epiphytic orchids, are about the conquest of space so eventually we'll get there... but I just wish I was smart enough to figure out a brilliant plan to help us get there sooner rather than later.  So far herclivation is the best plan that I've come up with.

Herclivation, which is just a theory, and nothing that I'd advocate without plenty of expert vetting/vouching/validating... would involve the introduction/translocation of non-native epiphytic CAM orchids to places like New Zealand.  At this stage in the game this is probably the last thing that Kirby and other experts would want people to do... The last uninvaded frontier?  And for all I know she could be right!  She probably is right!  Let's assume that she's right.  But I don't think it hurts to explore the possibility that she's wrong.  If she is right then how could her theory not hold up to some poking and prodding?

If you scroll down that entry of hers you'll see that she shared a picture of a Dendrobium (delicatum?) that she suspects was deliberately planted on a tree in nature.  To play the Dendrobium's advocate... how does she know that the Dendrobium wasn't from a seed that blew in from Australia where those types of orchids are native to?  Is that such an unreasonable assumption given that, as I've already pointed out, epiphytic orchids are all about the conquest of space?  If it could be proved, beyond a shadow of a doubt, that this was the case... would she still have removed it?  Aren't we guessing that all of New Zealand's native epiphytic orchids arrived from Australia?  I actually don't know if that's true or not.  It just seems reasonable enough to point out... because it would have been a problem if somebody had "weeded" the first arrivals.

The thing about that wayward Dendrobium is, as every Southern California orchid enthusiast knows, it's perfect for growing outdoors here.  And if it can thrive outdoors here in our very dry and extremely low humidity climate... then I think it would be pretty darn perfect for New Zealand's urban centers.  Here in SoCal we have to worry about watering this orchid every few days during summer... but in New Zealand urban centers... would they even need any supplemental water?

Oh man, I get green with envy at the thought of orchids on street trees not needing any supplemental water!!!  Exhibit A... orquideas plantadas em arvarores (Brazil).    Exhibit B (shared with permission)... 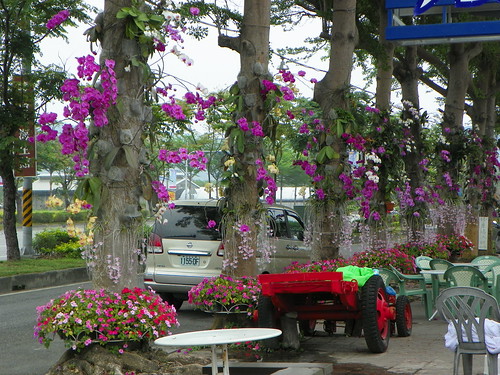 For those of you who don't know... there around 30,000 species of orchids... 20,000 of which are epiphytes.  A really large chunk of the epiphytic orchids are CAM orchids.  This basically means that they are succulents.  In fact, with this definition, the orchid family has more succulent plants than any other family... including the cactus family.  Quite a few orchids even grow on cactus and other succulents.  So with reasonably suitable temperatures such as here in SoCal and in New Zealand... there are literally 1000s of species of CAM orchids that can thrive outdoors on trees in lower humidity habitats.

My gut instinct is that attaching many of these slower growing CAM epiphytic orchids to trees in New Zealand's warmer and lower humidity urban centers would have all sorts of positive externalities.  Again and again I'm not advocating or suggesting this... I'm just saying that my gut... which is filled with a not insignificant amount of research into the topic... leads me to this possibility.  I just don't see these specialized CAM orchids really competing for the same niches that are preferred by New Zealand's native epiphytes.  So I'm really inclined to perceive that it wouldn't be a zero sum game.

In theory, it does stand to reason that the more CAM species that were introduced into New Zealand's urban centers... the greater the chances that one of them would really conquest space and truly crowd out a native orchid.  But I think you'd have to introduce quite a few CAM species before the chances were reasonably decent that a native would be displaced.  At that point, if you considered all the urban niches (and clearly some wild ones as well) that had been filled... all the added biodiversity... and all the facilitation cascades (fungus partners, pollinators, herbivores and their predators, etc)... and all the carbon sequestering effects... and all the general enjoyment/exposure effects... then it might not seem like a bad trade off.  Especially if all of New Zealand's epiphytic orchids have been successfully introduced to California's Pacific Northwest or suitable habitats in Chile.  Neither of which have any epiphytic orchids.

The more places that herclivation was implemented... the more progress we'd make towards reaching the goal.  This is because it's a numbers game.  Orchid seed pods can contain a million seeds.  This is pretty much the best recipe for finding where there's room for improvement.  So when you have more orchids on trees you greatly facilitate the conquest of space.  As a result, orchids would be able to grow on trees in France sooner rather than later.

And by that time that orchids can grow on trees in France it's a given that we'd have far more species than we do now.  The more places you put a species, the more species you'll create.  This is because no two places are exactly alike.  So when the same species adapts to different places... you get more species.

With Edens vanishing around the world... I think there's an obligation to help, in some way, to offset the loss of nature.  Maybe herclivation isn't the best way to do this... but we should really encourage and support epiphytic thinking when it comes to such an important topic.
Posted by Xerographica at 6:14 AM No comments: