This cross was a great find for three reasons...

1. I suspected that it might be hercuthermal (wider temperature grow range)
2. Two of the species (milleri and vitellina) are pollinated by hummingbirds
3. The nodosa theoretically adds some drought tolerance

Here's why I suspected that GP might be a hercutherm...

The vendor that I purchased GP from is in Florida so this cross definitely grows when it's warm.  My question was... would it also grow when it's cool?!   Just in case you don't know... I live in Glendale (a few miles east of Los Angeles) and I grow all my orchids outside year around.

So I decided to perform a little experiment.  I took a piece of wood from a broken down pallet and sawed it in half.  On one half I attached the GP and on the other half I attached a straight nodosa.  I hung both mounts right next to each other and tried to regularly water them early in the day.  For the rest of my plants, minus a few other exceptions, I severely cut back on watering like I usually do when it starts to get cool.

I took a few photos to document the experiment... 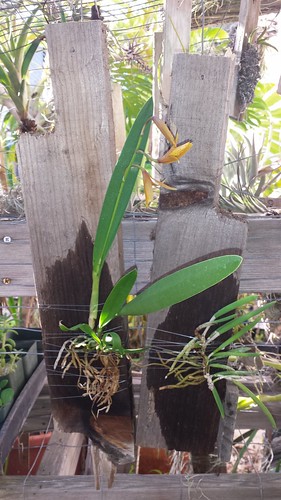 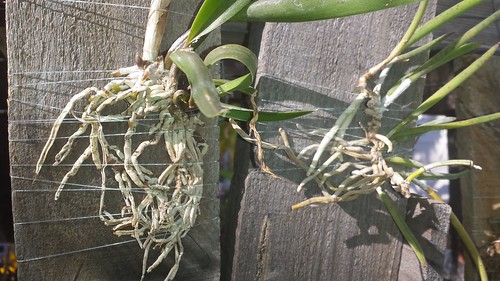 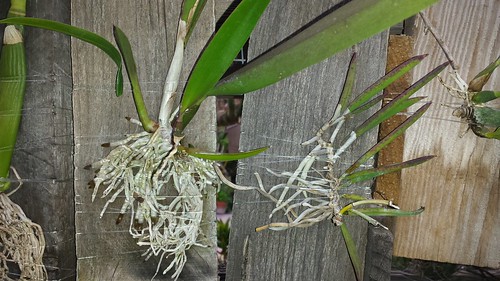 As you can tell from the photos ... there was quite a large disparity in their growth!  The GP put out quite a few roots and a new shoot while the nodosa is just starting to put out its first new root.  I didn't fertilize either orchid but they did receive quite a bit of sun.

It sure does seem like GP is more hercuthermal than nodosa but... perhaps there's another explanation for the disparity in their growth?  Maybe the GP somehow got more direct sun?  More sun means more heat.  Or maybe the nodosa had already entered into "hibernation" (aka rest mode)?  Or perhaps I talked to GP more than I talked to the nodosa?

In any case, whether or not GP is truly more hercuthermal than nodosa... it seems clear that GP is willing to continue growing in cooler weather as long as it receives enough water.  For the gazillion previous years that I've grown orchids I was quite happy to severely reduce water when it started to get cool.  My orchids would take a break from growing and I would take a break from my orchids!  Plus, for lots of tropicalish plants... cool+wet = rot.  So, when it's cooler, it's safer to err on the side of a lot less watering and a lot better drainage.

Aloe Hercules really forced me to reconsider this paradigm.  I don't water my succulents at all when it's even remotely cool but Hercules would keep growing anyways.  It seems logical that what allowed him to do so was... A. being hercuthermal and B. his ability to store water.  On rare occasions when it does rain here in Southern California... he really soaks up and stores the water and uses it to grow during the dry days.

If I hadn't regularly watered the GP would it have continued to grow?  It doesn't seem likely.  But it would have been nice to have been able to confirm this by having a "control" division of GP that didn't receive any supplemental water during the experiment. 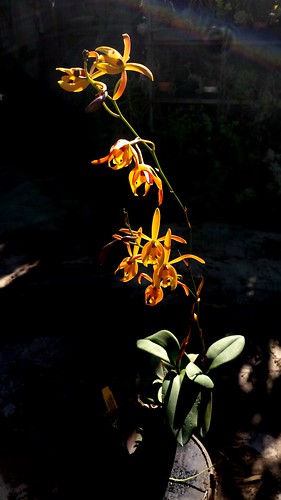 Carrot Top (CT) is a real sequential bloomer.  In fact, it's still blooming!  Five + months of blooming isn't too shabby!  Lots of blooms for my buck!

Back in January I noticed that CT's roots were still active.  It hadn't been receiving regular water like the GP and the nodosa... but... it was still potted SBOE style (pot in a pot with rocks).  Usually I mount orchids as soon as I get them... but in this case I had decided that perhaps it was adequately safe in such a well-drained medium.  If I had mounted it though... I wonder if its root tips still would have been active?  I'm guessing that, even though the rock medium was well-drained, it still provided more moisture than a mount without any moss would have.  So if I had mounted CT as soon as I got it... and didn't regularly water it... then I don't think that the roots would have continued to grow.

When I realized that CT was still actively growing... I decided to mount it.  Here's what I saw when I removed it from the outer pot... 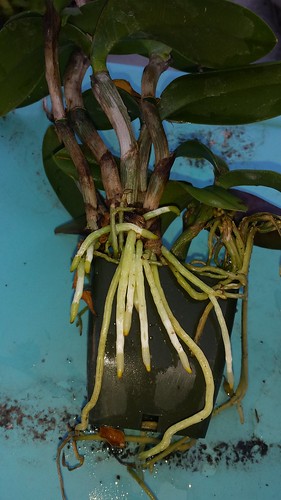 Lots of really happily active roots in the middle of winter!

According to the OrchidSpecies website, Cattleya sanguiloba is a cool grower and Epidendrum longipetalum is a cool to cold grower.  So CT is definitely a cool grower... and since it's from the SBOE... I'm guessing that it's also an intermediate grower as well.

In this case... there are two causes for CT's active roots in the middle of winter...

1. It's a cool/intermediate grower
2. It received enough water to grow

GP and Hercules are pretty much in the same boat.  The difference is that Hercules doesn't seem to need any supplemental water.

So I've been keeping an eye out for other vitellina crosses and have managed to find a few others...


Here's a recent picture of the third one in bloom... 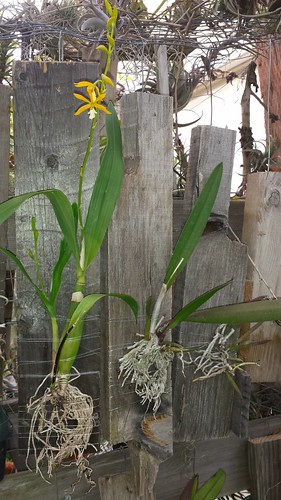 It would have had more flowers on it but I removed them to collect the pollen.

Out of the four orchids on that list, the last one (Laerianchea Orange Planet) is my most recent find and the one that I'm most excited about.  This is because this cross (OP) is closer to Hercules and hummingbirds than the other three are.  Guarianthe aurantiaca is pollinated by hummingbirds and Laelia rubescens is a warm grower and drought tolerant.  But is OP closer to the Hercules/hummingbird standard than GP is? 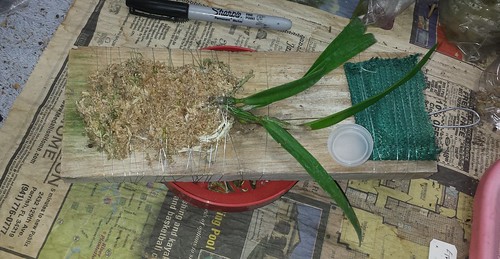 OP is not yet blooming size and I'm particularly impatient for it to grow!  So I added a pouch to hold slow release fertilizer granules (Osmocote).  The pouch is made from shade cloth and I used a couple water bottle lids as placeholders.  This is my first time trying this technique but my friend Dave has had some really great results with it.  He uses little plastic baskets to hold the fertilizer pellets.  We both got the idea when we visited an orchid grower in Malibu.... but Dave actually decided to give it a try.

It's invariably the case that tightly attaching an orchid to a mount will wound the orchid to some degree.  These wounds are susceptible to pathogens/rot.  Usually it's not a problem though if the orchid is happy enough.  But since I'm super excited about OP I decided to play it really safe.  For the past three days I've kept the orchid completely dry in my garage under lights.  The weather is still a bit on the cooler side and I wanted to make sure that any wounds on OP are completely healed before I put it outside and give it a good soaking.

In addition to purchasing some vitellina crosses... I also purchased the species... which is just starting to bloom... 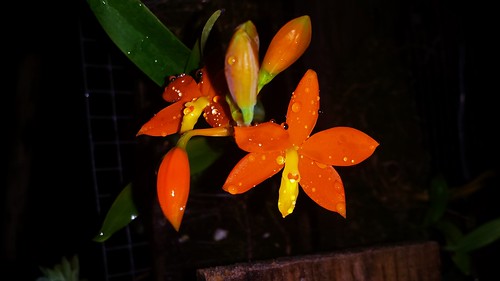 I've wanted to purchase it for the longest time but the consensus seemed to be that it really isn't a fan of the heat.   So what changed?  The hummingbirds talked me into buying it.  I think I'm becoming more and more susceptible to their influence.  Hopefully I'll be able to keep vitellina alive!

Back in February I saw that another vendor on eBay was also selling GP at a reasonable price.  He even had 10 of them for sale.  So on Feb 26 I shared a link with the Epiphyte Society of Southern California on Facebook.   But the GPs didn't sell like hot cakes!  Well... the ESSC had less than 30 "likes" back then.  So on Mar 3 I shared the link with the Orchid Society of Southern California.   The OSSC has over 2000 likes... but the GPs still didn't sell like hot cakes!   Right now there are still 6 GPs for sale.

So here I am!   Making my case!  Showing some evidence!  Offering some logic!  Trying to increase the demand for hercuthermal orchids.  And hummingbird orchids.  And drought tolerant orchids.   And sequentially blooming orchids.   Orchids that are more like Hercules and better for hummingbirds really should sell like hot cakes!

Let's think about the long-term goal.  Here's a picture of my street... 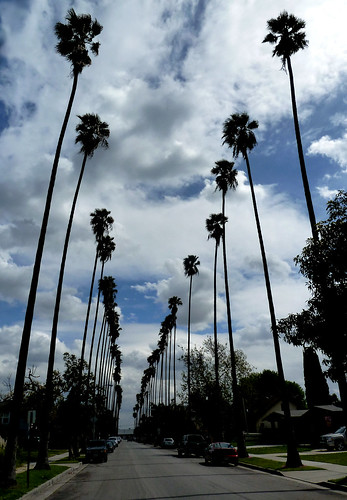 I suppose I could buy the six remaining GPs and then ask my closest neighbors for permission to attach them to their palms.   They might want to know who would be responsible for watering them.  Me?!  It's a given that my neighbors would be more inclined to give their permission if I offered to water the GPs.  And I suppose I could walk up and down my street with a super soaker in my hands and a couple more slung over my shoulders.  Or I could program a drone to water them for me?

The ideal orchid wouldn't require any supplemental water.  I could just go around my neighborhood attaching it to palm trees without ever having to worry about watering!  Each orchid that I attached to a palm would provide lots of color and interest for humans and lots of food for hummingbirds.

My experiment doesn't definitively prove that progress can be made in this direction.  But hopefully it will help generate interest in the possibility of progress!

What can you do if are interested in hercuthermal and/or hummingbird and/or sequential blooming and/or drought tolerant hybrids?

Hybridizers aren't mind readers.  So if you want orchids that are substantially better, then you have to communicate your preferences to hybridizers.  You have to let them know that you want orchids that come as close as possible to meeting the Hercules/hummingbird (HH) standard.  The more hybridizers there are trying to meet the HH standard... the more fabulous outliers we will be able to grow.
Posted by Xerographica at 8:45 AM