Check out this thread... Some things currently in bloom. Yeah, they aren't orchids... but if you scroll down you'll see some nice propagation going on.

I've mentioned in a couple threads that I've successfully germinated some reed-stem Epidendrum seeds without flasking them. I basically used the same technique that I use for succulent seeds, Begonia seeds, Gesneriad seeds and so on.

I'm guessing that, unlike the seeds of most orchids, the seeds of some reed-stem Epi species contain enough nutrients to germinate on their own. It's just a guess though because the only way to be certain that absolutely no facilitative fungus was involved would be to flask the sterilized seeds without any nutrients. Which I'm probably not going to do...

Instead, I've been going around sticking Epi secundum pollen in different flowers...

For some of these it's a bit surprising that pods have even started to develop. And, interestingly enough, this is pretty much the same list of orchids that I've attempted to pollinate with pollen from Epi secundum. Even though it's a pretty small sample group it seems like many, or even most, orchids in the Cattleya alliance are receptive to Epi secundum pollen.

Here are the registered intergeneric crosses with Epi secundum as the pollen parent....

That's the entire list! And they were all made by the same nursery... Rex Foster Orchids.

I'm guessing that crosses with Epi secundum as the pollen parent aren't very spectacular. But, some reed-stem intergeneric crosses aren't too shabby... Reed-stem Epidendrum Hybrids. Personally, I'd be pretty happy if I could easily grow Epicattleya Orange Blaze from seed!

Epc Orange Blaze is 75% reed-stem. What are the chances that it can easily grow from seed? Coincidentally, there's one currently on eBay... Epidendrum "Orange Blaze", Orchidée, Orchid... in France.

Here's a clue regarding whether 50% or higher reed-stem Epi crosses might be able to easily germinate from seed...

One of the oldest artificial epidendrum hybrids is Epidendrum O'brienianum, a cross between E. radicans and a member of the E. secundum complex (Epidendrum evectum). The E. secundum influence predominates in that the column is straight and the lip is uppermost with a small fleshy callus. Epidendrum O'brienianum is a common garden plant in subtropical areas; spontaneous seedlings occur in varying colors. This hybrid sometimes "escapes" from the garden and may appear to be native in areas as far apart as Mexico and Africa. Unlabled plants in gardens and greenhouses are likely to be hybrids, and they may have almost any combination of reed-stem species in their background. These epidendrums are usually tetraploids, so that the Epidendrum parent predominates in crosses with Cattleya or Laelia. Epicattleyas of this type could easily pass for pure reed-stems in dim light, but they always have at least the tip of the column free from the lip. - Robert L. Dressler, Will the Real Epidendrum ibaguense Please Stand Up?


If the crosses themselves are strongly influenced by the reed-stem parent... then you'd figure that the same would be true of their seeds. This would mean that there's a decent chance that the seeds of 50% reed-stem crosses can be easily germinated. If it is relatively easy to germinate 50% reed-stem seeds... then, in theory, many people would be happy to hybridize accordingly... and, by the law of truly large numbers, we'd expect to see at least a few 50% reed-stem crosses that we'd be happy to purchase or trade for. Over time there would be an increase in the supply of seeds from desirable crosses. These seeds would be relatively easy to germinate... so as their supply increased... there would be a logical and corresponding increase in total happiness.

With more and more people happily growing orchids from seed we would also expect to see faster climatic convergence. Some seedlings are always going to be better suited to any given conditions. So more seedlings grown would mean faster adaptation. As a result, there would be more and more orchids growing outdoors year around in colder and/or drier areas. Basically...

And here's a photo of my highest epiphyte... 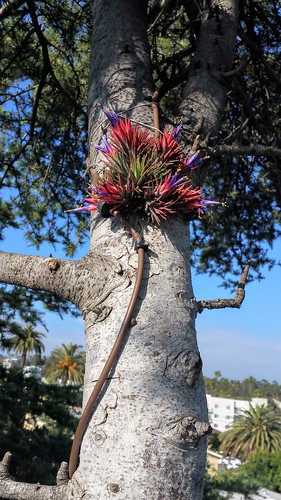 This Tillandsia ionantha clump is over 3 stories high.  As you can see by the 1/4" polytube... it's watered via drip... twice a week at night during summer.   Other than the fairly infrequent winter rain... I get the feeling that it doesn't get any water on its leaves.  So I'm guessing that its roots can and do absorb moisture.

It's entertaining watching the hummingbirds go up and down my Cedar tree visiting the different plants in bloom... Tillandsias, Gesneriads, Echeverias and so on.  The tree is a vertical buffet for hummingbirds!
Posted by Xerographica at 1:06 PM No comments: