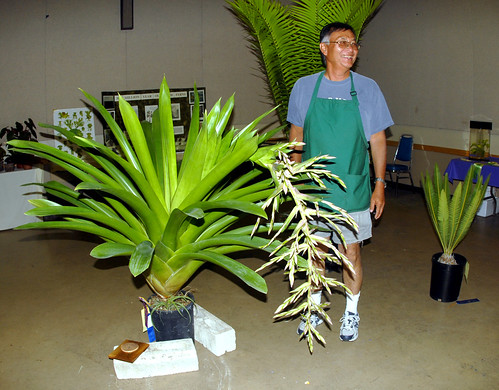 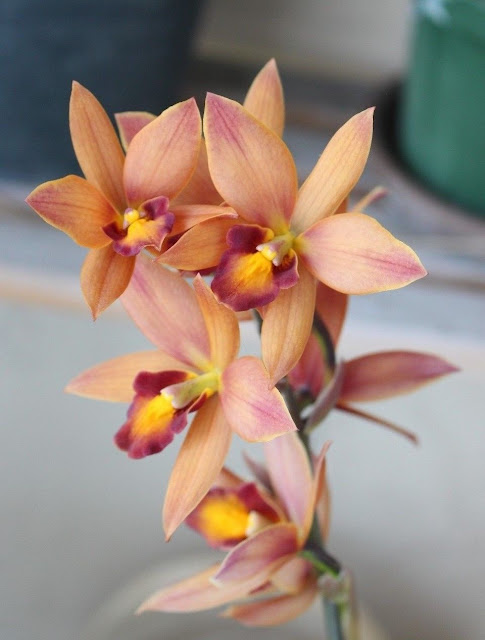 What would happen if everybody who attended a plant show could use their money to judge the plants?

Here's a recent pic of an orchid (Microcoelia exilis) that I entered into the LA Fern and Exotic plant show a few years back... 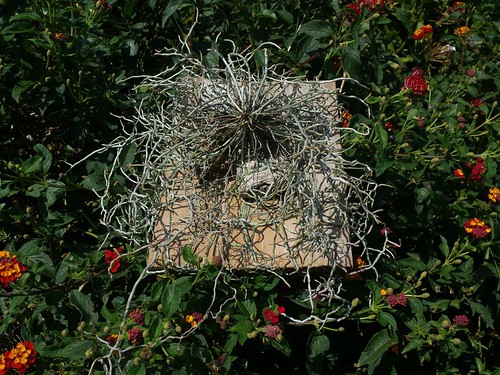 It's just a big mess of roots!  I don't remember if it received a ribbon.  Personally, I don't really care about ribbons.  My primary motivation was to introduce people to an awesome plant.

Pretend that you're at the show and you see my orchid.  Do you think it's awesome?  If so, then you could take your judging form out and write down the plant's number and your valuation.  There wouldn't be a minimum valuation.  It could be as small as a penny.

The next plant that you see at the show is my phorobana... 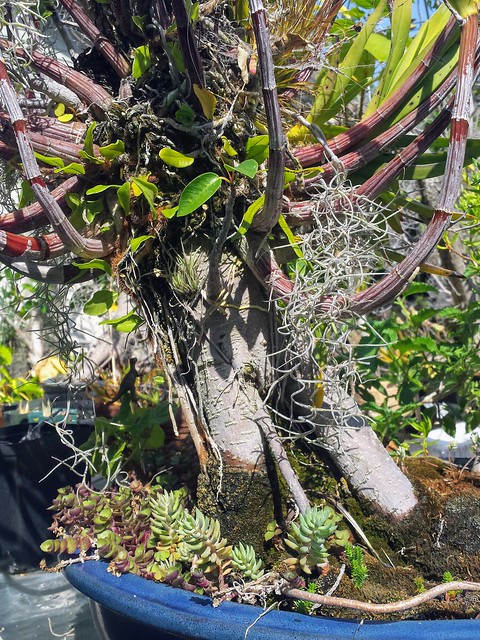 It's a big mess of roots and leaves!  It's a bunch of different epiphytes growing on a Ficus macrophylla (Moreton Bay fig) in a pot.  You lean in for a closer look and spot a tiny orchid in bloom... 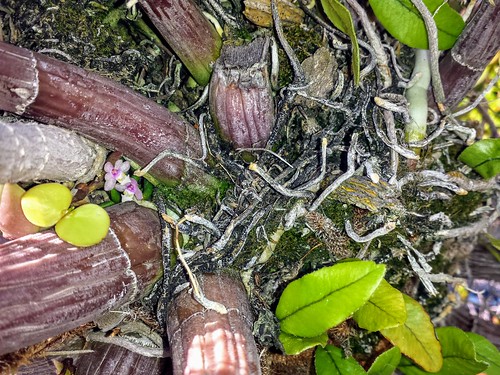 It's a Cleisostoma scolopendrifolium orchid nestled within the canes of a Dendrobium delicatum orchid.  The other two epiphytes in the vicinity are Dischidia cleistantha and Microgramma vacciniifolia.  Finding the tiny orchid is just like finding an Easter Egg.

Do you think the phorobana is awesome?  If so, then you'd write down its number and your valuation.  After you had judged the plants, you'd turn in your form.  The clerk would add up your valuations and you'd donate the money.  Ideally there would be a real-time updated webpage where you could see all the plants sorted by their valuations.

Initially I figured that the society wouldn't take a cut.  I thought that all the money should go to the people who had earned it. But then my friend Scadoxus pointed out that people could just spend ridiculous amounts of money on their own plants in order to win. I hadn't thought of that.  Two heads are better than one!  Personally, I wouldn’t prohibit people from valuating their own plants.  If you bring in 10 plants, then I would want to know how you would divide your money between them. But it’s probably a good idea though for the society to take a cut. Ideally the society should get all the money that you spend on your own plants.  But then you might just give your money to your friends to spend on your plants.

I'm guessing that the most common objection to this idea will be something like... "Why in the world would anybody want to pay people to do something that they are already doing for free???"

The Fern and Exotic plant show is great because it features a wide variety of plants.  But I don't equally like the plants.  I don't think that all the plants in the show are equally exotic or exciting or awesome or rare or fascinating or unusual or interesting or important or impressive or drool-worthy.  Yes, it's very easy for me to simply tell Norm that I think his plant is super cool.  This is true.  What makes it so easy is that I know him.

Let's say that you see this Hydnophytum formicarum in a cactus and succulent show... 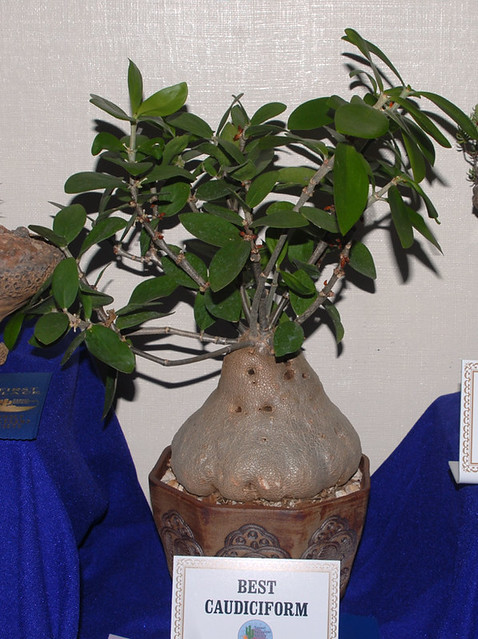 It's the first time that you've ever seen an ant-plant in a cactus and succulent show, or any show for that matter.  The name of the exhibitor is next to the plant but you don't know who she is.  If your valuation of her plant is $0.25 cents, are you going to track her down and give her a high-five?  Probably not.  But if you have a valuation form with you, and you would like to see more ant-plants in shows, then you might as well write down your valuation.  It's certainly easy enough to do.  Judging plants with money makes it easier for more people to give and receive more positive feedback.

What about negative feedback?  If I think that somebody's plant is incredibly boring, then I'm probably not going to tell them.  Especially if I don't know them.  It's certainly true that I wouldn't be able to write down a negative valuation on my form.   But if we all had the opportunity to use our money to judge the plants, then everybody would see everybody's valuations of the plants.  This means that we would all clearly see and know the disparity in value between all the plants...

Which is more important, the amounts in relative or absolute terms?  I can see that my M. exilis is relatively more valuable than my phorobana so I'd know that people are more interested in the leafless orchid.  In terms of absolute amounts, the $1.32 might be enough to encourage me to bring the leafless orchid the next year.  But because the phorobana is so much heavier, it's doubtful that the $0.55 would be enough to encourage me to bring it again.  In all cases the benefit should be greater than the cost.

Personally, I've only shown my plants once... or twice... several years ago.  I haven't done it since because it was too much work.  Which is the same thing as saying that the reward was too small.

My friend Scadoxus went to a Begonia show this past Saturday.  She said that it was pretty terrible.  She didn't enter any plants into the show because it was too much work (too small a reward).  However, she did see Norm there.  I don't know if he exhibited any plants, but he certainly sold some... including a few to Scadoxus.

Therefore, more judges are always better than less judges.  The more judges there are, the less impact that delusions, misperceptions, craziness and biases will have on the results.  Filtering out more fantasy brings us closer to reality.

It's certainly possible though that everybody else underestimates the importance of phorobanas.  But this is hardly an argument for having less judges.  If I'm the only person who correctly estimates the importance of phorobanas, chances are slim that I'll be included in a small group of judges.  However, when everybody can be a judge, then at least my correct estimate will have some influence on the results.  My influence might be vanishingly small but that's still better than nothing.

In all cases more heads are better than less heads.  Voila!  Please use your head to judge the idea of allowing everybody to use their money to judge plants at shows.
Posted by Xerographica at 5:51 PM No comments: