Flickr allows you to add hyperlinks in a few different places...but it doesn't create the hyperlinks for you.  At the request of a Flickr friend...


Copy and paste the URL into here...


Enter the text for the link

Posted by Xerographica at 7:57 AM No comments:

One thing I feel compelled to note is that it can't be the rule that introduced exotics decrease biodiversity.  Or else each exotic plant introduced to the Hawaiian Islands over the past 28 million years would have reduced biodiversity.  You can't have much biodiversity if every introduction results in the loss of one established species.  Errr...you can't have any biodiversity because the second exotic plant species would simply have replaced the first...and the third species would have replaced the second...

It could certainly be prudent to play it safe by arguing against the introduction of any species anywhere...but I think the priority should really be determining why some introduced species increase, rather than decrease, biodiversity.

The first plant to establish in Hawaii was like the first person on the bus.  They had their pick of seats.  It would be surprising for the second person to board the bus and force the first person out of their seat.  "Hey, that's my seat!"  It's not the greatest analogy because we have to imagine people being better suited to certain seats on a bus.

How many seats (microhabitats) are there in Hawaii?  We can imagine an epiphyte boarding the bus and seeing that all the seats were taken..."it's ok, I prefer sitting on the roof".  Epiphytes have no problem sitting in really uncomfortable seats.  That's why they really increase the biodiversity to space ratio.

When I spent three years in the jungles of Panama...I really can't say that I saw a lot of people sitting on top of the buses.  Epiphytes were the exception rather than the rule.  Then again, I spent most of my time on the "drier" Pacific side.

Oncidium cebolleta grows in the dry forests of the Americas and Dendrobium canaliculatum grows in the dry forests of Australia.  I would be extremely surprised if their cross introductions resulted in the loss of biodiversity.  There are plenty of empty uncomfortable seats.  Or maybe they would say to each other like two old time western gunslingers..."this here town ain't big enough for the two of us".

Epiphytic orchids, unlike other epiphytes such as bromeliads, rarely ever have high density populations.  Generally they are few and far between.  For me this seems to indicate that the rule for introduced orchids will not be a reduction in biodiversity.

Not sure if I'm remembering/interpreting a paper correctly...but a study of established reed stem Epidendrums in Hawaii seemed to indicate that they've already started to noticeably differentiate in the past 50 or so years since they've naturalized.  It's pretty amazing how quickly they've adapted to the selective pressures of a new environment.  I wonder how long it would take for them to become a new subspecies...and eventually a new species.
Posted by Xerographica at 2:20 AM No comments:

A. Orchids are the largest plant family. Around 10% of all flowering plants are orchids...most of which are epiphytes.

B. An orchid capsule can contain a million seeds.

C. A is the result of B. Each unique seed is one chance for success. One million seeds equals one million chances of success. Imagine an Easter Egg hunt with only one Easter Egg. The more kids participating in the hunt...the greater the chances that the Easter Egg will be found.

D. Orchid seeds don't contain enough nutrients for them to germinate on their own. This mean the dust like seeds can travel great distances. But the trade-off is that wherever they land there has to be a certain type of microscopic fungus. The fungus penetrates the orchid seed and provides it with the nutrients it needs to germinate. To learn more...

1. The Symbiotic Relationship Between Orchids And Fungus
2. We Need More Orchid Celebrities

E. The Orchid family has more succulent species than any other family...including the Cactus family. In other words...no other plant family has more CAM species. To learn more...

Which Family Has The Most CAM Species?

1. Wide variety of pollinators...even crickets.
2. As you already mentioned they can lure some pollinators by smelling like dead meat
3. They can tricks hoverflies by pretending to be distressed aphids
4. They can trick lonely male pollinators
5. They can smell like a hornet's prey
Posted by Xerographica at 6:13 PM No comments:

Yesterday I received an e-mail notification from flickr that I have a new follower...Wm Ray.  It's a good thing...a bit of positive feedback that floats my way every once in a while.  Like always, I clicked the link to see his (I guess) photos.  Because...if my photos match his preferences...then maybe his photos will match my preferences.  It's happened before.   Hmmm...which is better...gaining a new follower or finding a new person to follow?  Errr...followee?  That's not a word.  Oh wait...I just googled it and it is a word!

Ray didn't have any photos...or favorites.  It's not too unusual.  For the heck of it I clicked on his profile page and saw this... 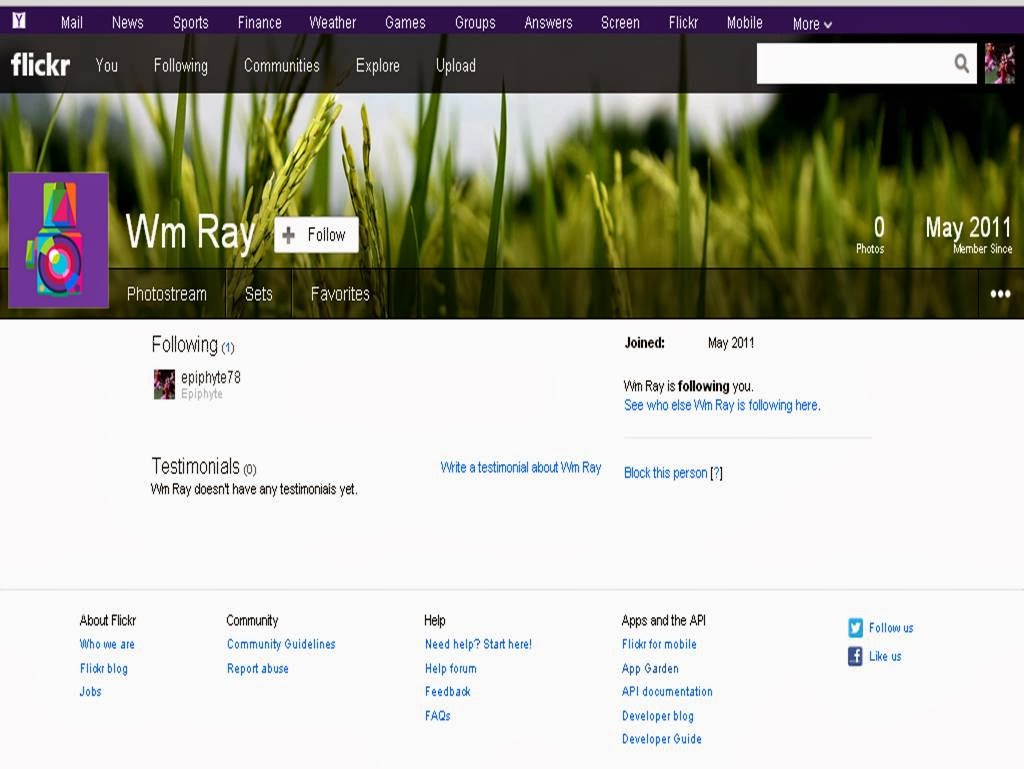 First I looked to see who else he might be following...and I discovered that I'm the only one.  That's unusual.  And then I looked to see when Ray joined flickr...2011.  I laughed.  I didn't have to laugh...it wasn't obligatory...it was entirely involuntary.  Why did I laugh?

A few related things were triggered in my brain...

Maybe a long time ago (2011) Ray joined flickr and wasn't too impressed with the selection of photographers and/or orchid growers.  Except, I've been a member since 2007...but not actively until maybe 2009.  So it took three years for A. Ray to find me or B. for my photos to finally match his preferences.  Maybe a kind of tipping point was reached and my photos finally crawled into the threshold.

The paucity of clues created a very holey story that stole a chuckle from me.  Of course I can't help but wonder what the real story is.  Anybody want to guess the real story?  It's probably pretty mundane.  Anybody want to make up an outlandish story?  Is anybody else only following one person on flickr?  If so, who and why?
Posted by Xerographica at 6:58 PM No comments:

Charles Alford sells some really nice Platyceriums.  I've always been satisfied with the value to price ratio.  He only sells four times a year though.  You have to e-mail him to get on his list.  But he offers many neat epiphytic ferns that you can't get elsewhere.

Tom has a nice collection of Platyceriums...all outdoors year around here in Southern California.  Also good value to price ratio.

Growing Platyceriums from spore is pretty easy.  The hardest part is the waiting.

One thing that's pretty great about Platyceriums is that they make perfect baskets for all types of plants.  This can greatly increase the value to space ratio.  For example...

Bifurcatums are fairly common here in Southern California...so if somebody shows me one it's like showing me an empty basket.  I have the same perspective with bonsais.  A nice bonsai will have a pretty decent value to space ratio...but it's still a tree without anything growing on it.  It's a blank canvas.

Imagine if Frank attends a bonsai show or a fern show.  Let's say that he has a budding general interest in plants.  What's the average amount of time he spends looking at each entry?  Two seconds?  I'm pretty sure if each bonsai and Platycerium had one companion plant...then the total amount of time he spent looking at the exhibits would increase.  How much would the total time increase if each entry had two companion plants?

Depending on the preferences of the exhibitors...the companion plants could stand out and instantly grab your attention...or they could be more like Easter Eggs (media).

When I first moved into my house...my plant friends would walk right past my Cedar tree.  As I started attaching more and more plants to it...visitors would linger longer and longer.  I refer to this as the Man Man Zou standard.  It's Chinese for "walk slow"...or "walk carefully".  As in you'll want to take your time so that you don't miss any delightful details.
Posted by Xerographica at 2:04 AM No comments: