Ever wonder why humans are exceptionally intelligent?  My theory is that it's because walking upright gave us the ability to simultaneously carry many things, and deciding what to carry is cognitively challenging.  Correctly discerning what to keep, and what to discard, depends on using more brainpower to process more information.  I collect relevant passages... jettison... here's one that I found on this forum...

Also, I recall reading a post somewhere a few years back written by someone who said he knew DW, and went on to describe how DW had thousands of hybrids, and saved the best, and discarded (believe it or not!) MANY of his "rejects" into a canyon off his property. The story goes, he did this until he caught wind that others were scrounging his castoffs in that canyon, after which he started destroying them instead. - Spination, A couple more new to me hybrids

Recently I separated a bunch of Echeveria rosea seedlings... 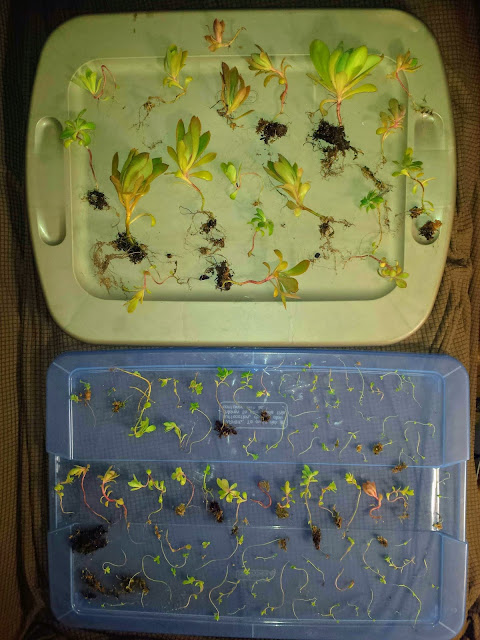 I'm pretty sure that most of the larger seedlings have Echeveria gibbiflora as their father.  It was blooming at the same time in the same area as rosea.  Am I going to destroy any of these seedlings?  Nooooooo.  Echeveria rosea is my very favorite Echeveria, so I really want everybody to grow it and/or its hybrids.  I'm going to give all the seedlings away next month at the Village Green Thumbs plant trade.  My friend Scadoxus and I recently created that Facebook group for plant enthusiasts in her area (Culver City) to trade/share/sell plants.  One person's trash is another person's treasure.

Echeveria rosea is primarily an epiphyte, but I've found that it isn't a drier grower.  It slowly declined  on my tree when I reduced watering from 3x to 2x a week at night during summer.  Echeveria gibbiflora, on the other hand, is not an epiphyte but it is a drier grower, so the seedlings on my tree had no problem with less frequent watering.  Unfortunately they tended to slowly break their own necks.  Here are a couple exceptions that are starting to spike... 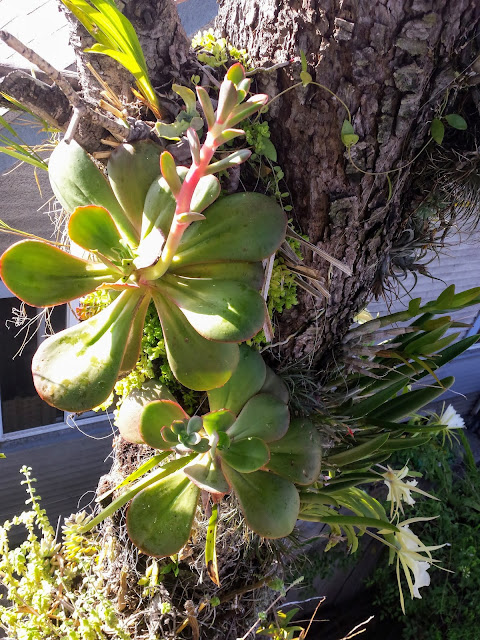 These are more compact than the typical form, all of which broke their necks.  In the photo you can also see an orchid blooming and a dragon fruit blooming.  The dragon fruit is actually growing on the fence.  Here's a pic of the orchid... 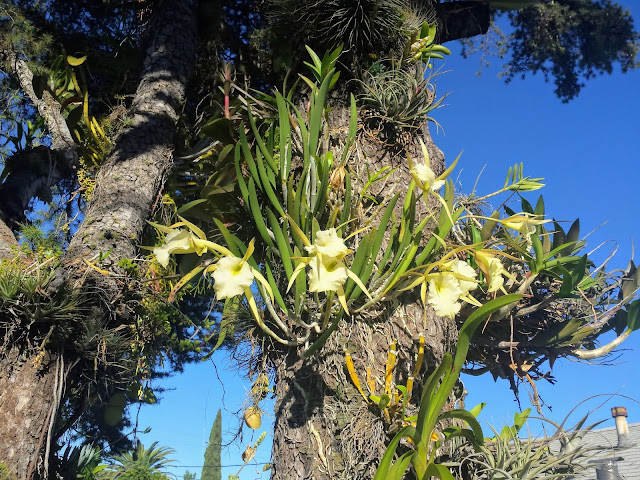 Rhynchovola Jimminey Cricket (Brassavola nodosa × Rhyncholaelia digbyana) is a strong grower that blooms more often as it gets more pseudobulbs.  The flowers are pretty big, but they aren't very long-lived... and the color white really doesn't stand out on the tree.  Ideally when an orchid blooms on a tree every hummingbird in the neighborhood should be drawn to it.

This orchid is definitely a relatively succulent orchid.  But I'd prefer if this thread was primarily about growing non-epiphytic succulents epiphytically.  For example... 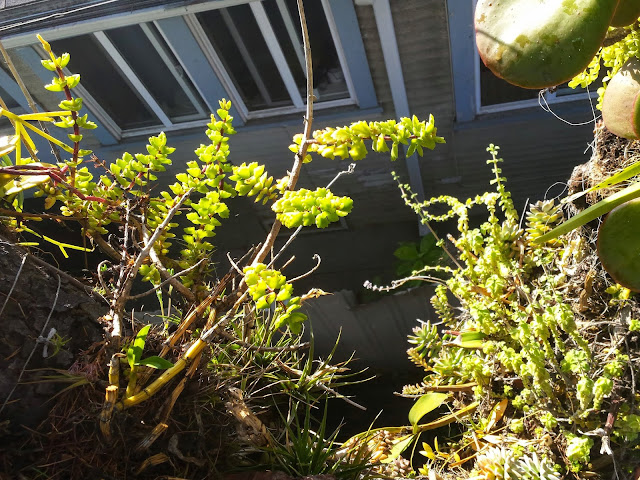 Plectranthus spicatus has succulent leaves and does quite well on the tree.  You can see another Plectranthus that's thriving... but it isn't nearly as succulent... I don't know the name of it.

In Feb 2016 I sowed a bunch of Golden Barrel Cactus (Echinocactus grusonii) seeds together with seeds from Reed Stem Epidendrums.  It turned out that birds really like to eat the cactus seeds.  Fortunately I didn't keep all my eggs in the same basket.  I put a few pots in buckets covered in clear plastic, here's one of them... 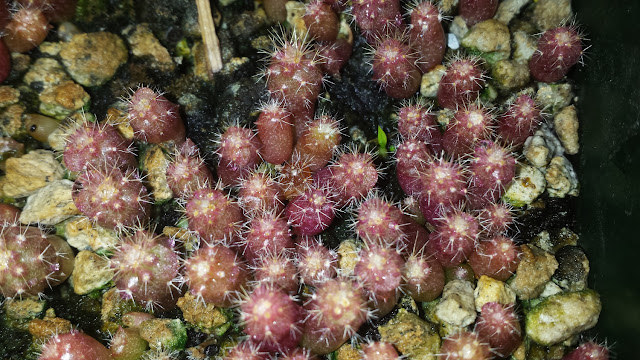 If you look closely you can see one reed-stem seedling... it's the only green thing in the pic.  The cactus won this round, maybe because the medium was too big for the tiny orchid seeds.

I also sowed some of both seeds behind a mounted Platycerium, here's a recent pic... 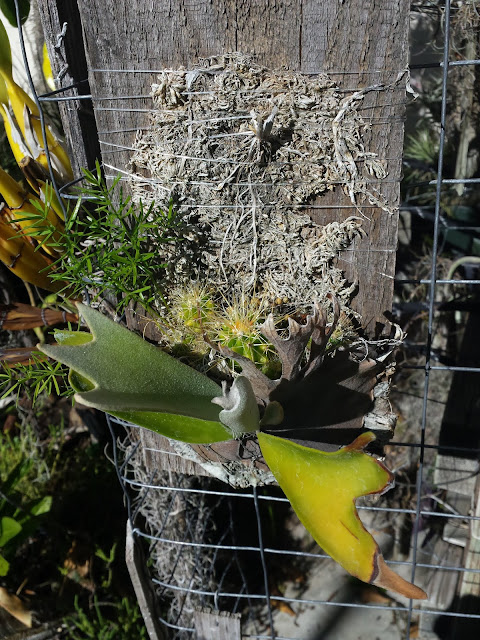 There are actually quite a few seedlings competing for very limited resources.  Here's another mount that I sowed some of the seeds on.... 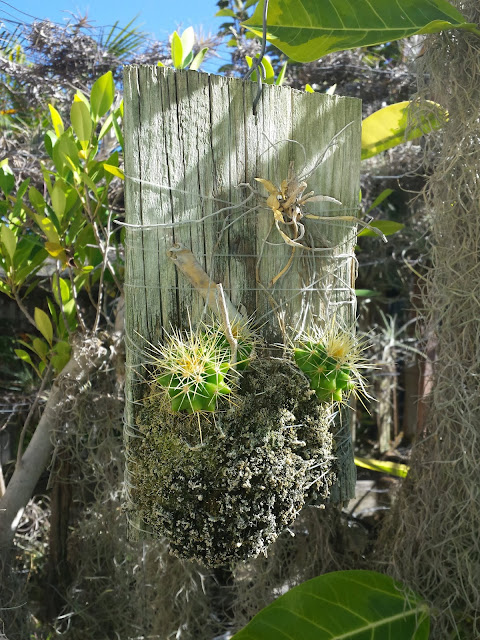 In this case I think most of the cactus seeds, or seedlings, fell off.  Neither of these mounts were watered frequently enough for the reed-stem seeds to germinate and/or grow.

Some of the cactus seedlings in pots are much bigger than the mounted seedlings.  But it's not like I really have the space for a mature Golden Barrel cactus.  The mounted seedlings won't get very large.... they will essentially be bonsai'd.  Well, in theory!

On Flickr I created a gallery of accidentally epiphytic cactus and here's a gallery of accidentally epiphytic succulents.  Anybody recognize this Aloe?  I'd love to know what it is because it's sure thriving on that tree.  Some of the stems of this Aloe are much longer and thicker than I realized when I first saw the pic.  I'm somewhat embarrassed to admit that I only just recently mounted my first Aloe... Aloe bakeri.

For some reason you can't add your own photos to your own galleries, so I created an album for my photos of accidentally epiphytic plants.  There are a few succulents in it.

Three years ago at the Huntington I took this pic of an Aloe accidentally growing on a big cactus... 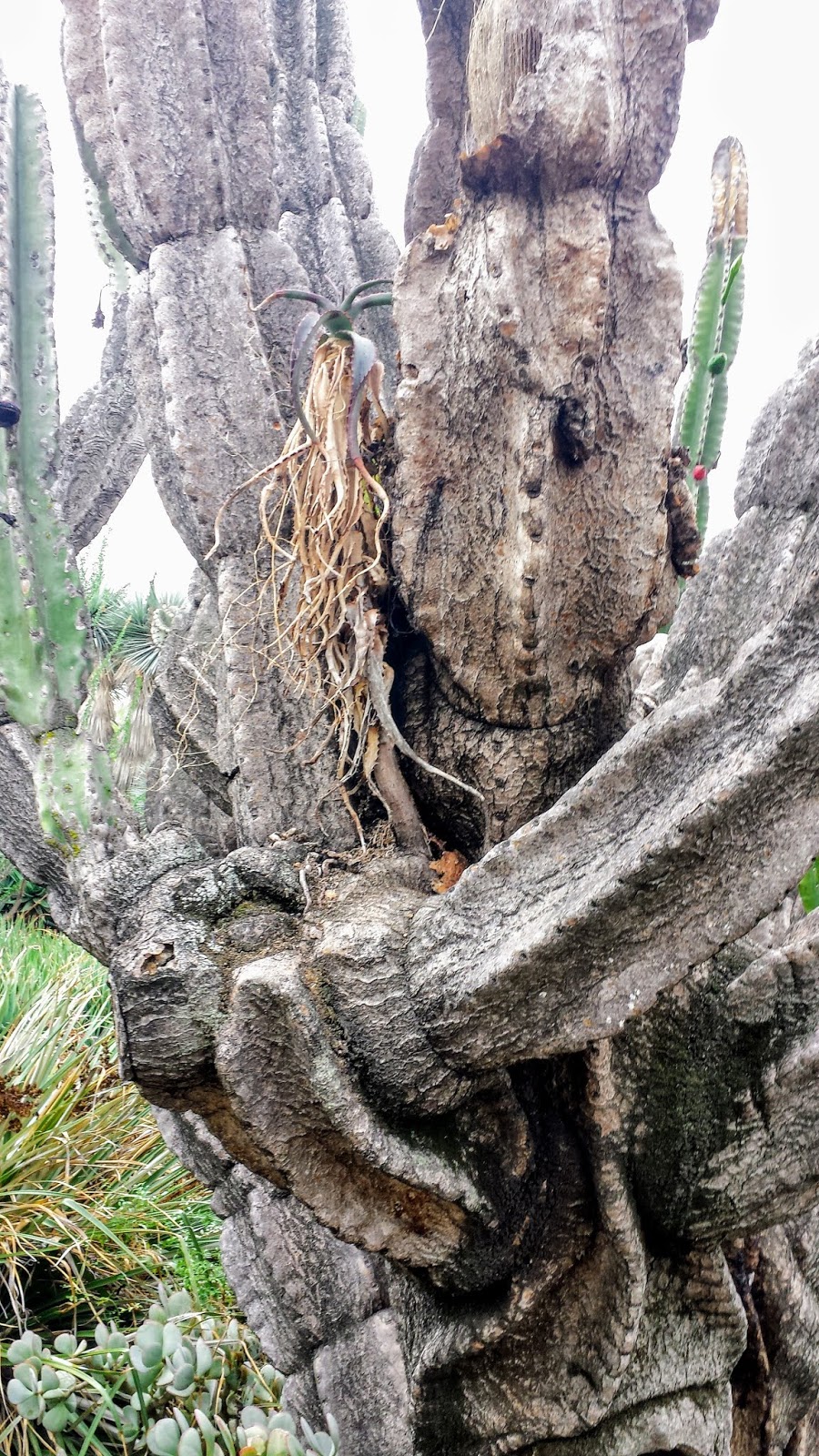 Anybody recognize the Aloe?

Daniel Gledhill, who is very knowledgeable about tree Aloes and runs the Tree Aloe group on Facebook, said that he's seen Aloe thraskii growing epiphytically before.  He also informed me that Thomas Cole's Aloes of Uganda mentions that Aloe lukeana can be found growing on trees.

Why aren't there already the Aloe equivalents of epiphytic cactus?  Maybe it's because Aloe seeds are less likely to end up on trees than cactus seeds.

Thanks to the Pinoy Epiphyte Addicts group on Facebook, I indirectly learned about a thread created in this forum for Agaves growing epiphytically.  Not sure how I managed to overlook that thread.  I didn't overlook the 2009 thread that Stone Jaguar created in the Growing on the Edge forum for Yucca lacandonica.  A Google search revealed a somewhat blurry picture of Agave mitis growing epiphytically in a cloud forest (Tamaulipas).   All these pics have got me really curious how a nondescript miniature Agave I have would do epiphytically.

A few years back, in the XericWorld forum, I created a thread for the same topic of growing succulents epiphytically.  I, and others, added quite a few pictures and links to the thread... it was really great!  But then one day the entire website was gone.  Evidently the owner decided that it was no longer worth carrying.  It was obviously his prerogative to make that decision, but his decision certainly wasn't informed by my valuation of my threads and other people's threads.  He knew the cost and benefit of the website for himself, but he didn't know the benefit of the website to others.  As a result, his cost/benefit analysis wasn't correct.

Whether we're talking about a plant forum or an Aloe hybrid, correctly determining the actual worth of something depends on giving everybody the opportunity to share their valuations of it.

Posted by Xerographica at 6:24 AM 2 comments:

Let's Have An Online Plant Show!

In this recent PalmTalk thread I shared a link to my previous entry as well as a couple ideas for plant societies...

Tracy responded to the thread with some thoughts and this pic... 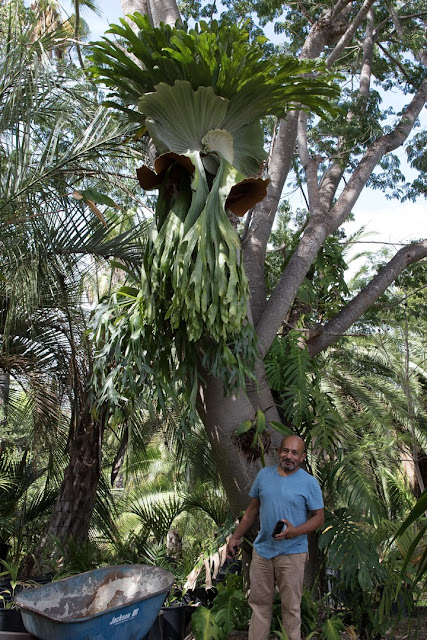 Wow!!!  I replied to Tracy that this Staghorn fern on a tree in SoCal is a perfect example of why we really need to have an online plant show.  Here's another perfect example... 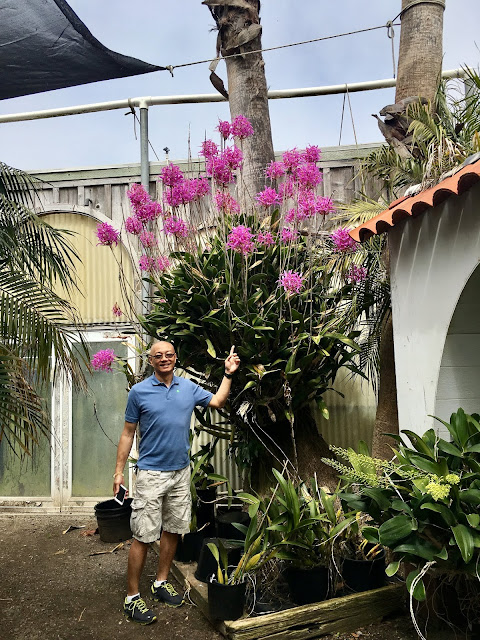 Wow!!!  Phil shared this pic with me when he came over for a tour last week.  It was taken at the Santa Barbara Orchid Estate, which I've visited many times, but somehow never when this specimen was in bloom.   I was fortunate though that I was able to see another specimen in bloom at the SBOE... 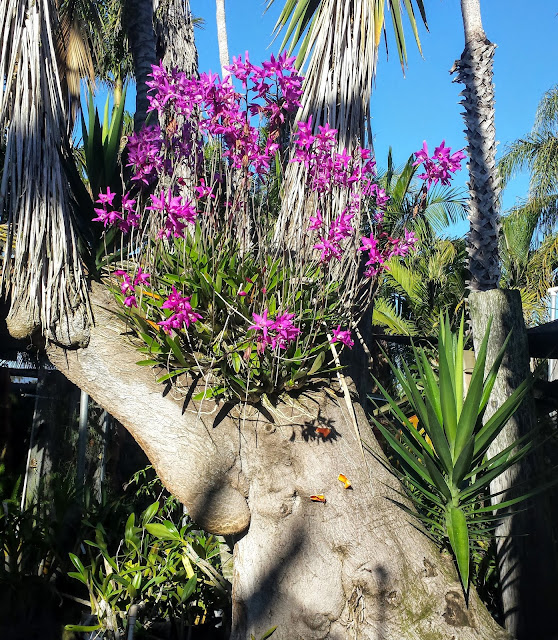 How many trees in Southern California should have orchids, ferns and other epiphytes growing on them... but do not?  Too many!!!  So let's have an online plant show!