What epiphytic ant plants are those of you in Southern California (and similar climates) growing outside year around?

Here's my reply to Anyone else growing ant plants? Lecanopteris, myrmecodia...

I was super happy when Myrmecodia beccarii survived its first winter outside. It got down to at least 32F. Unfortunately, it only put out two new leaves this summer. But it didn't lose many so that's a good thing.

It's mounted on a wooden plank that's covered with a fairly thin layer of New Zealand Sphagnum. During summer I water it at night but it dries out during the day. It probably wants more moisture but it's always safer to err on the side of too much drainage.

I also have Dischidia major. It's mounted just like the M. beccarii. It's grown really great this summer. This will be the first winter that I'll test it outside.

What I plan on doing with all of my "test" Hoyas/Dischidias is cutting off all their new growth which I'll propagate inside the house in clear storage bins covered in clear plastic by the windows. In previous years the new growth would get killed by the cold and this would open the door for miniature monsters to rush in and kill the plant.

Not sure if this Dischidia is really an ant plant... 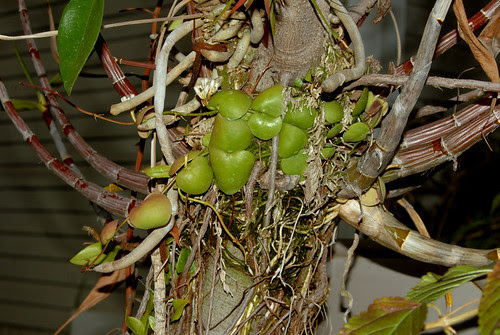 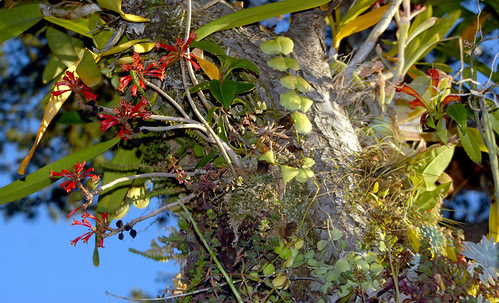 I've had quite a bit of success with Myrmecophilas. Because they are CAM orchids I don't use any moss when I attach them to boards. Plus, I try and give them as much full sun as possible.

Pachycentria glauca did pretty great during the summer...but it really didn't like my fall decrease in watering frequency. It didn't help that mine were just recently established cuttings. I'd like to try growing them from seed to see if there's any drought tolerance variation between the seedlings.

I also tried an ant fern...it made a bit of growth during summer but then deteriorated during winter. It made it to spring but didn't have any energy left to hold on for summer. So it wasn't the cold that killed it...it was a lack of warmth. It might have survived in the warmest spot in my garden.
Posted by Xerographica at 11:32 AM